skip to main | skip to sidebar

a few more pics that I didn't put last night:

Little House Neighbourhood, this one I did in October-November, only the text is missing. I'd like to put something in Finnish rather than the original English text. 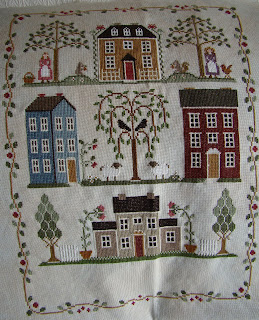 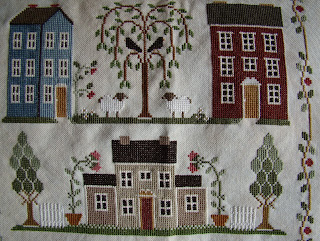 This is the first pin keep of my life:) the stitching is old and it's not very symmetrical but it's the first one:) 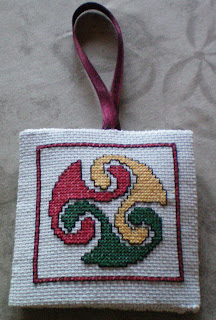 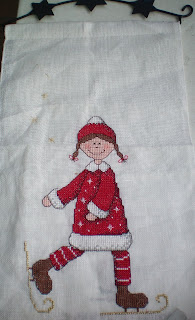 And finally this "Summer Garden" by Country Cottage Needleworks I started a few days ago, I don't have all the DMC threads needed for it but I just replace what I don't have with something else. 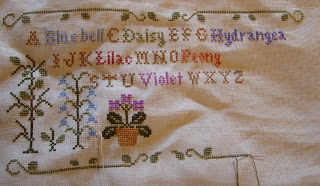 No update for ages....
Here is a pile of pics to show that I have been stitching. Just that first I was on a long holiday, then working, then on holiday, at some point very lazy, in November found out I'm pregnant, in December that the baby is due already in March and not early summer like I first thought and now I'm already on maternity leave, the baby was due a few days ago but since she doesn't want to come out, I have a max of one more week of time to full time stitch:)

But here are pics: 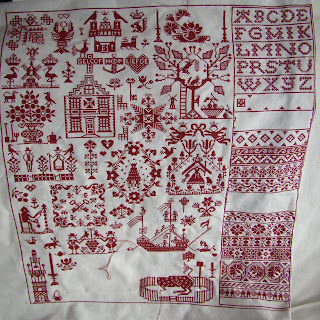 Then something for my daughter, good night-afgan although the colours are not as in the chart, the frame I got with 1 or 2 € from Carrefour and painted it with the same blue as the babycrib. 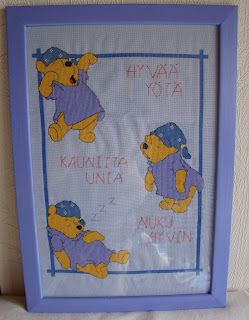 then a pinkeep:) My second one, the stitching I had done long time ago but never used it. 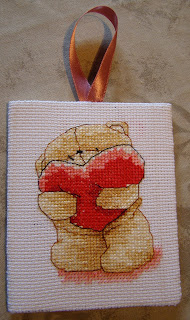 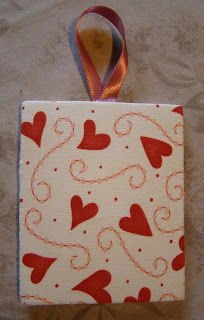 then something quick, I had lots of pink linen and I bought some Vikki Clayton silks and wanted to try them. The chart is "Bouncing Annie" by Marie-Anne Réthoret-Mélin from Creative Poppy 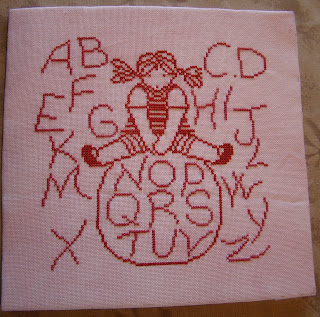 Then at some point Yuko at http://yuks-behappy.blogspot.com/ was selling charts that she
didn't need so I bought these two, Just Nans had been on my wish list for a long time 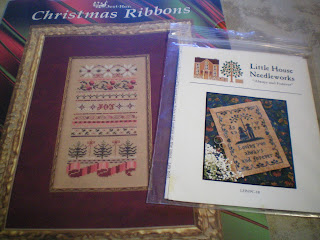 And this I intend to do at some point, it's from the fil en aiguille magazine, little box made into a room, some stitching, some dollhouse furniture, very cute:) 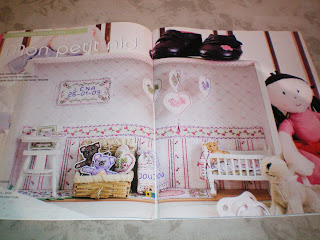 And some fabric I bought from the US, don't know yet what I'll do but as they are mostly quite childish, they obviously are for my daughter:) 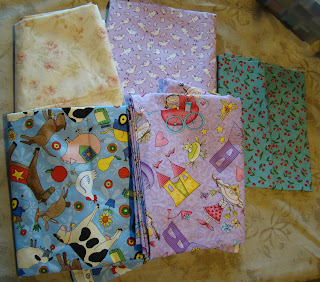 This I did for my brother at Christmas (without knowing that he was gonna get a dog a few months later...), it's by All our yesterdays. 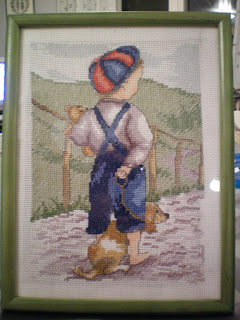 This is a free chart from Sof http://swappons.kazeo.com/, I did it over the Christmas with the thread and fabric I had as the shops were closed. 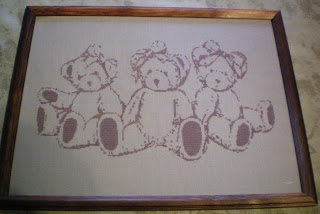 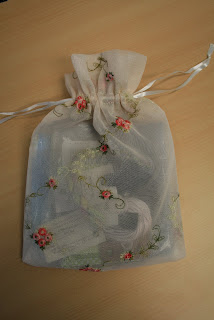 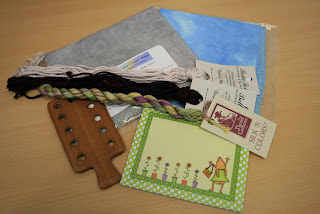 Via Stitching Bloggers Birthday club I got this wonderful gift from Julianne ( http://juliannep.blogspot.com/ ).
A pretty bag and inside it... two pieces of Silkweaver fabric, three skeins of silk (I don't have any Belle Soie from before), a self stick note-book (or what ever you call it in English: ) and a wooden thread keep! AND on top of that she said she will send me later something self stitched...and ON TOP OF THAT she's ordered me a chart from my wishlist together with the fabric, thread and embellishments!!!!Thank you so much, I'm truly grateful, this really is a wonderful gift!!
I like birthdays:))
Posted by anna at 16:38 8 comments: 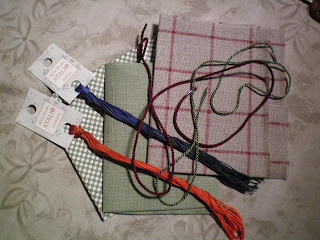 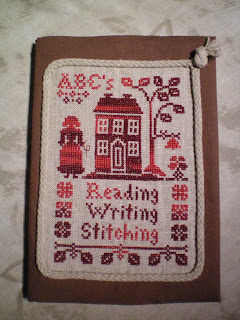 Here, this is what I got for my birthday from Marika ( http://loviisa95.vuodatus.net/), fabric (I don't have any fabric with squares from before, just plain aida and linen), ribbons, thread and a lovely notebook, she had sown(sewn? it's getting too late to think about verb conjugations...) a cover and stitched over it. I really like it, ISO KIITOS!!!


And here below are a few almost finished pieces that I thought I would make into Christmas tree ornaments. 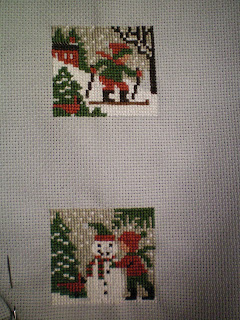 And finally, a new start, it will be a birthday gift for a friend of mine, it's a design by Just Nan, that's all I'm gonna say:) Originally I had planned to stitch her a sampler by Gigi (picture full of her first names first letters) but then I realized it would be really big and take for ever. So I found this among my stash. I like the colours of the thread and the fabric, it's a piece of 28 count Silkweavers Stirling silver that I got in trade from http://litlaskvis.wordpress.com/ (I love her work and also her choice of fabrics for her stitching). 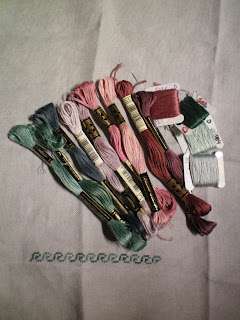 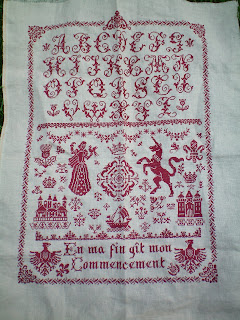 It's been - once again - ages since my last post but here are a few pics of a few of my works. I've finished Mary Queen of Scots and I've managed to do a bit more for Opus II. 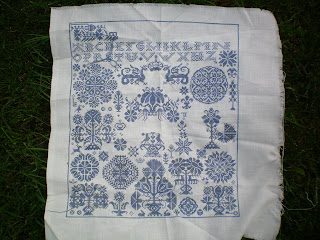 I've also done a few Christmas tree ornaments and finally received my order from Stitching bits and bobs, they had a sale several months ago. Some Bent Creek charts, small ones, one Little house Needlework, some thread and a few cheap pieces of linen.

Then it's my birthday on Tuesday!:) This year I'm with one Finnish and one international birthday exchange so I should receive a total of 4 stitching related gifts (and I'm also responsible for sending four to others). And one of them has arrived already! This parcel from Marika in Oulu arrived on Thursday and I've managed NOT to open it yet, I have no idea how:) Two more nights.... the picture in the parcel is a painting by a Finnish artist Albert Edefelt. Thank you!! 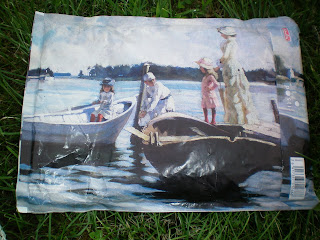 The past few weeks I've had some days that I really haven't felt like stitching at all but then on some days, luckily I have:)
I've mainly done my wonderful Chatelaine, I'm still in love with the design:) Although I can't continue it as much as I would like to, it seems that when I ordered the thread, I didn't get one Needlepoint silk and also instead of one pale blue/turquoise dinky dyes silk I got a completely wrong one, a light pink one...Why didn't I check the colours before?.... I've placed an order at the Stitching bits and bobs but as the order once again has something they are out of stock, it will take a while to get here... 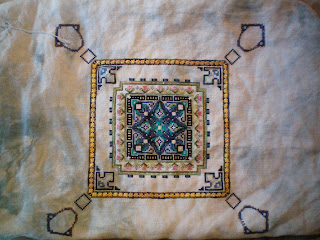 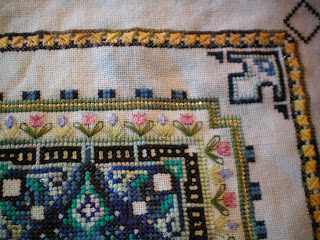 Then I've also done one small childish thing, a "Nintje", it was a kit I got from the fleamarket. A cutie! 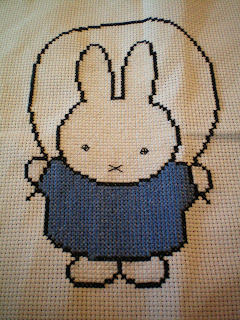 The third pic is a new Wip, it's a double Dutch sampler by Sampler Cove designs featured in the the Gift of Cross Stitching magazine last summer. I've had the fabric (36 count) and the thread (Gloriana silks) for a long time. AS it's 36 count, it's going really slowly. 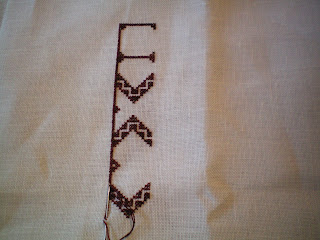 That's it for now:)
(While writing this I'm listening the new cd "Terra" by the portuguese fado singer Mariza, it has some beautiful songs on it...)
Posted by anna at 20:50 10 comments:

The past few days I've concentrated on my Chatelaine, my lovely lovely Chatelaine...I really love the design and I love stitching it... I'm doing parts two and three, I've done most of the parts one and two, just the special stitches and the beads are missing.
And I love the flowers, after I stitched them I even thought I should just stop and frame it as it is:) 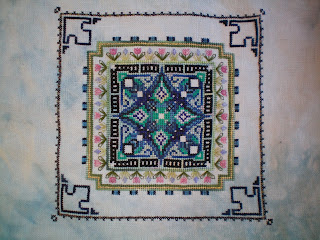 I have already these kits and charts and they are waiting to be stitched:

* The Garden chair by Cat's Whiskers

* all silk and hand dyed linen

For exchanges: used charts are welcome!